Butterfly Babies: Invasion of the Caterpillars 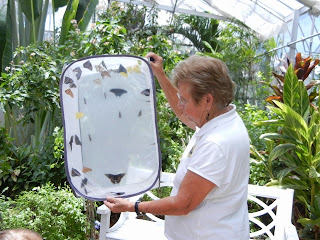 Early this morning I went on the lanai to check on my butterfly babies. Instead of pupating overnight as I had prayed they would, they had stripped entirely three milkweed plants that I added only two days before. What is more, they were crawling faster than I imagined possible for a caterpillar, as they frantically hunted for food. Like energetic two-year-old's anxious to explore, many of them had managed to escape the nylon netting and were crawling around the floor.

As I raced to scoop them up before my cat could get to them and returned them to their cage, I realized I had "opened a can of caterpillars" when I rescued those Monarch eggs from the wasp last weekend. I noticed that one of the caterpillars had attached itself to the wall behind the cage and had begun to pupate. I carefully picked it up and placed it in the cage. It is amazing how attached I have become to these little creatures and how responsible I feel for their survival!

I quickly realized I had more than I bargained for on my hands and called Joyce Sanders, manager of the butterfly house at The Butterfly Estates  in Fort Myers. We have a membership with the Estates and Joyce has been a prolific source of information for me. Her suggestion (which never occurred to me) was to bring the caterpillars to her and she would see them through to maturity. Once they have emerged from their cocoons, they will be released in the garden enclosure at the Estates to the delight of the visiting children and adults.

As for me, I have decided that the next time I want to observe the transformation of a butterfly, I will buy an authentic butterfly cage and limit the number of eggs I put in it. With my children's book, Benny's Angel, about to go on the market, my plate is too full to be foster mother to an army of caterpillars.

~Laura Allen Nonemaker
I began writing as a child in Bermuda when a favorite teacher had one of my essays published in a local newspaper. I am a charter member of Louisville Christian Writers and a new member of Gulf Coast Writers in Florida.I have been a contributing writer for Kentucky Monthly Magazine and my work has appeared in Essence's Celebrating the Season and Alive! Magazine. The publication in 2011 of my children's book,Benny's Angel,fulfills a dream. In addition to writing, I have enjoyed drawing and painting since childhood. Three limited edition prints have been produced from my art, including "Old Timer," which took first place in the portrait division at the 2006 Kentucky State Fair. Because of my interest in the arts, I am on the planning team for Artful Missions, which produces juried art shows and donates most of the proceeds to ministries that help women and children escape human trafficking. I have three children,two grandchildren, and four great-grandchildren from my marriage to my first husband, Bob McCrea, who is now with the Lord. With my second husband, Paul, I have two stepsons and four more grandchildren. Our blended family is a blessing.